Designing dataviz for the human brain

Data visualization, like Perec’s La Dispiration, also follows an Oulipo sense of constraint; the designer maps out data points to a specific visual property, transforming it into a codified language. I guess it’s restrictive in the sense that the design process is dictated by the information itself, but having said that, I find dataviz highly creative. Having strict parameters (such as hard data) to work with can be liberating for a designer as long as you understand how the brain receives information.

The good news is that dataviz involves many of the same tricks as graphic design, such as repetition and contrast. You just need to use them in slightly different ways when you’re working with data.

The starting point of any dataviz is thinking carefully about the end user and how they will receive and process the information.

The Gestalt effect can be useful to think about here; this is the way our brain transforms a random collection of simple lines and shapes into a distinct object. 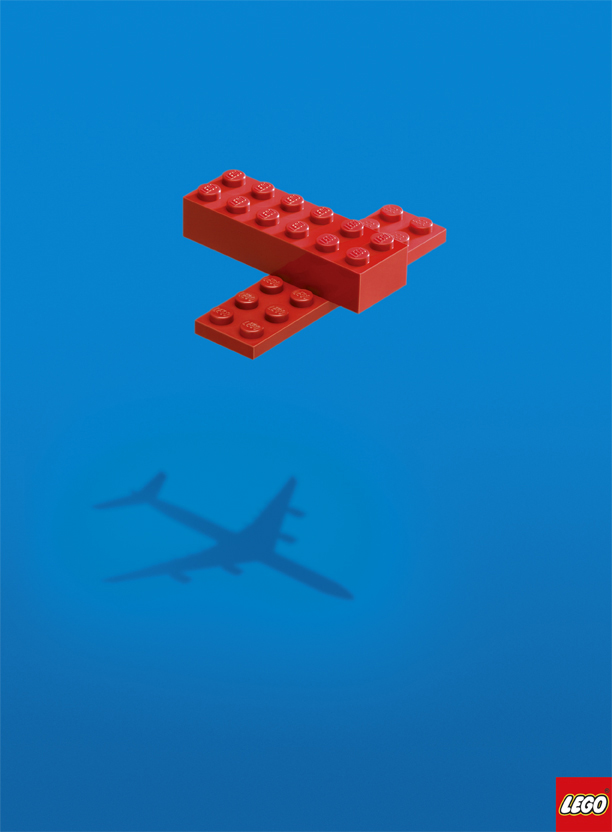 Our brain actively wants to make sense of the shapes, forms and colours we see. This advertisement from Lego is a great example of the Gestalt effect in action

Using design to leverage our brain’s built-in pattern detection system makes it easier to understand complex structures and most importantly, data relationships. Let’s look at a few ways how.

1. Focus on the essential

Choosing your angle is arguably the most important step. Showing everything at once is equivalent to showing nothing at all. Selecting specific dimensions/variables in the data will have a big impact on the insight you will get out of the visualization.

Here’s an example by the sort-of-controversial-but-highly-popular data journalist David McCandless.

McCandless had to update this viz three times as the volcano calculations were found to be inaccurate but the idea of comparing the emissions of planes and volcanoes works really well. It’s simple and effective, as it grounds the volcano data (unknown in scale and impact to the vast majority of the population) to the well-publicised emissions of the aviation industry. 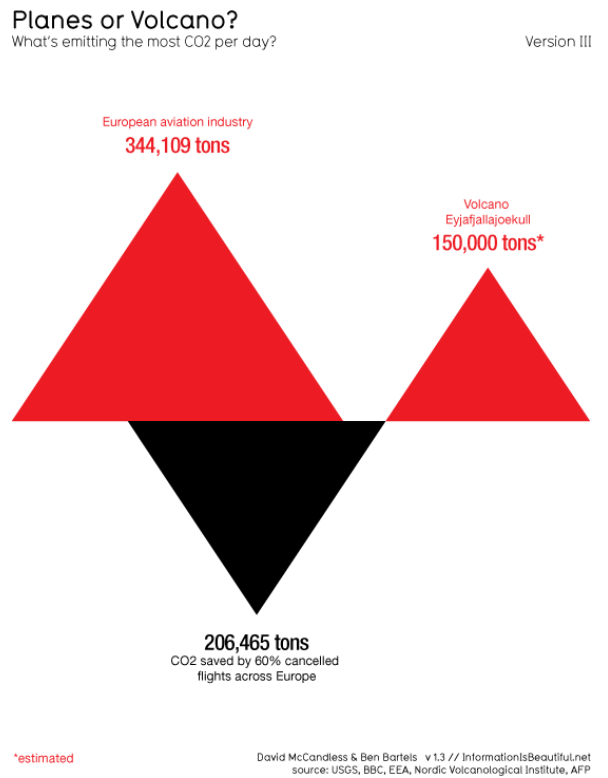 Information designers need to be adept at finding an angle or point of comparison in the dataset(s)
(Source: informationisbeautiful.net)

A small multiple (sometimes called a trellis chart, lattice chart, grid chart, or panel chart) is a series of similar graphs or charts using the same scale + axes, which allows them to be easily compared. In other words, it uses multiple views to show different partitions of a dataset. Putting these elements side by side encourages the eye to identify similarities and differences, and also show how things relate to each other.

Comparing data points is an often-overlooked part of data visualization but it’s a critical feature for anyone who wants to understand the big picture without having to go back to a spreadsheet. 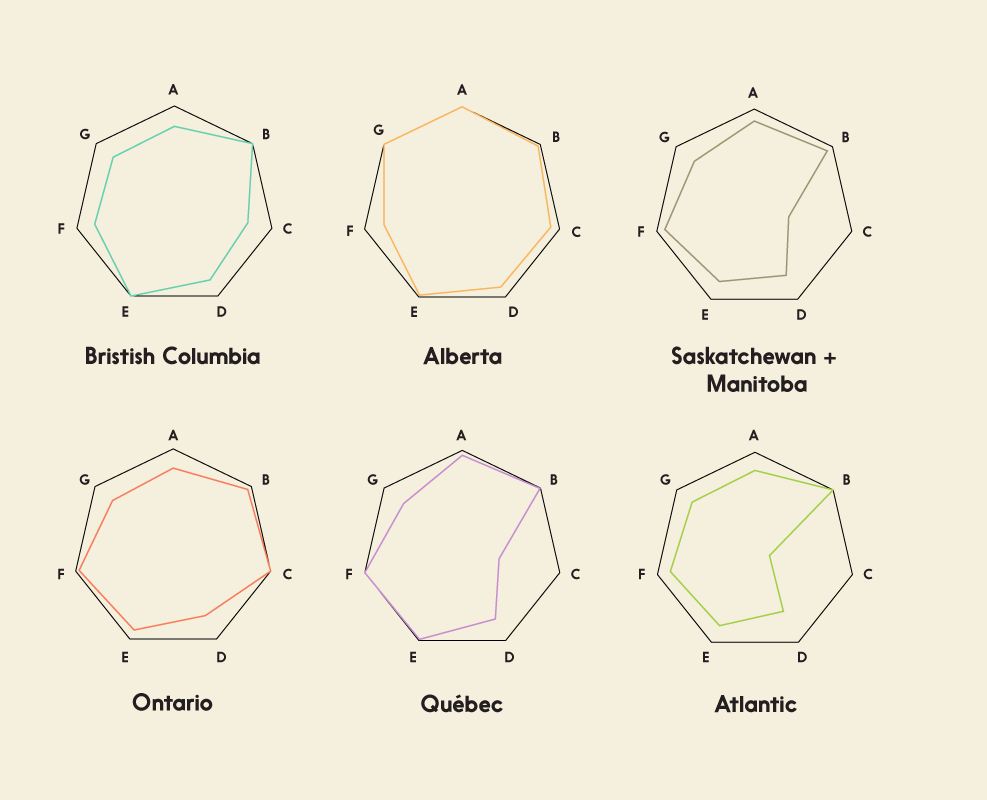 Repetition is a technique that is common in graphic design anyway; using small multiples is basically the same thing with a twist in motivation. 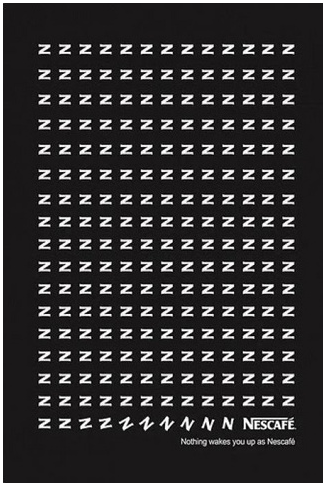 A non-dataviz example of repetition in design: this Nescafe advertisement is straightforward but very effective

3. Use contrast to direct attention

Any given dataset will have elements that stand out, or there could be an aspect that deserves to be followed with greater care or connected to other parts of the viz. By highlighting a singular thread throughout a series of visualizations you reinforce your narrative and make it stronger. 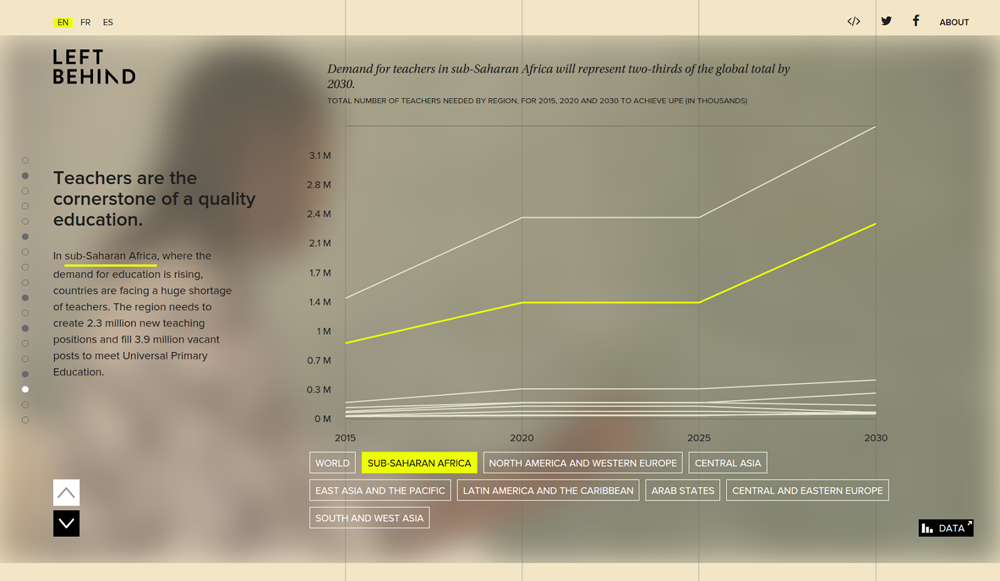 The neon yellow in this interactive dataviz for UNESCO Institute for Statistics links the chart with its corresponding geographic tag and text. The brain sees all three and makes the connections almost instantaneously (Image courtesy of FFunction)

4. Use symbols to communicate ideas

Designers of all stripes are used to using visual metaphors. In dataviz, well chosen metaphors can have a great impact in communicating data, especially when the information is relatively simple.

Here’s an example taken from an interactive called “Le Salaire des Banquiers,” which we made for French magazine Basta. If you click on the link you can quickly see that an average income earner would have to work 2.7 years to earn the same as a trader does in just one month.

Representing this ratio as stacks of coins forces the brain to measure the weight of the numbers. 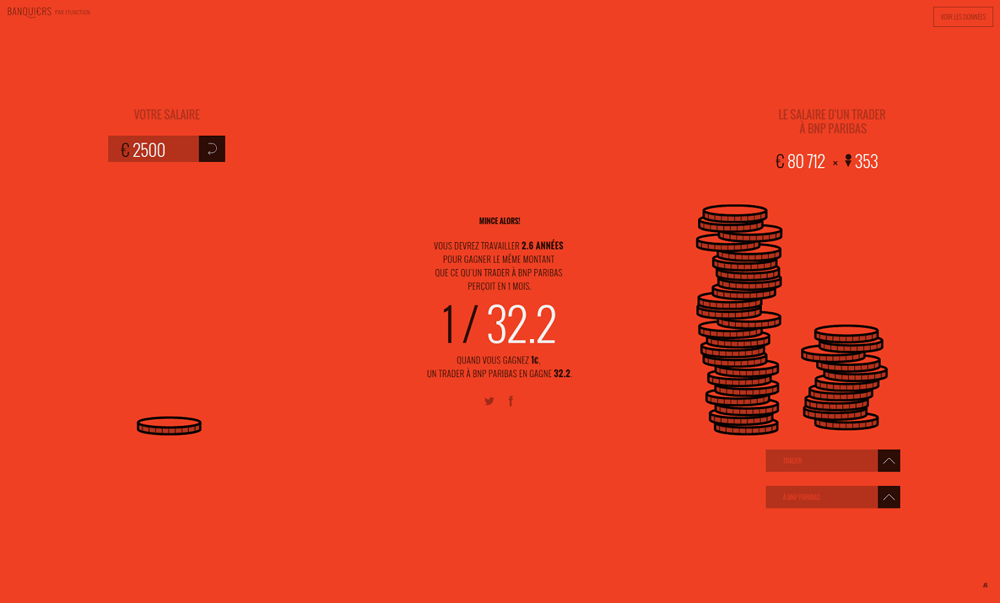 These are not the only considerations to bear in mind when designing with data.

Last November, researchers from the Harvard John A. Paulson School of Engineering and Applied Sciences (SEAS) and MIT’s Computer Science and Artificial Intelligence Laboratory (CSAIL) rolled out a new study that analyzed people’s eye movements as they looked at charts, graphs and infographics. By doing this, the researchers were able to determine which aspects of visualizations make them “memorable, understandable and informative.” It’s worth a read, they make some good points about repetition and the importance of a good title.

Overall, I would say the biggest challenge for information designers is to make the data relevant and close some of the distance between seeing the numbers and grasping them.

In other words, the beauty of dataviz is in the understanding.