I recently stumbled on this article published by La Presse, one of Montreal’s major daily newspapers. They analyzed SPVM data on break-ins in the city of Montreal since 2015, and the resulting heatmap dataviz promised to reveal the robbery hotspots in the city. Intrigued, I clicked on it. A giant red blob appeared above Montreal, […] 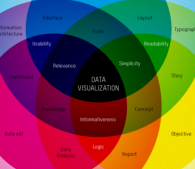 When we started FFunction, it was 2008. This was before the Infographic Boom of 2010 and at that stage people didn’t even know what data visualization was. Back then I made this dinky little Venn diagram in an effort to explain the discipline and its uses, and it is still floating around the internet on Pinterest […]