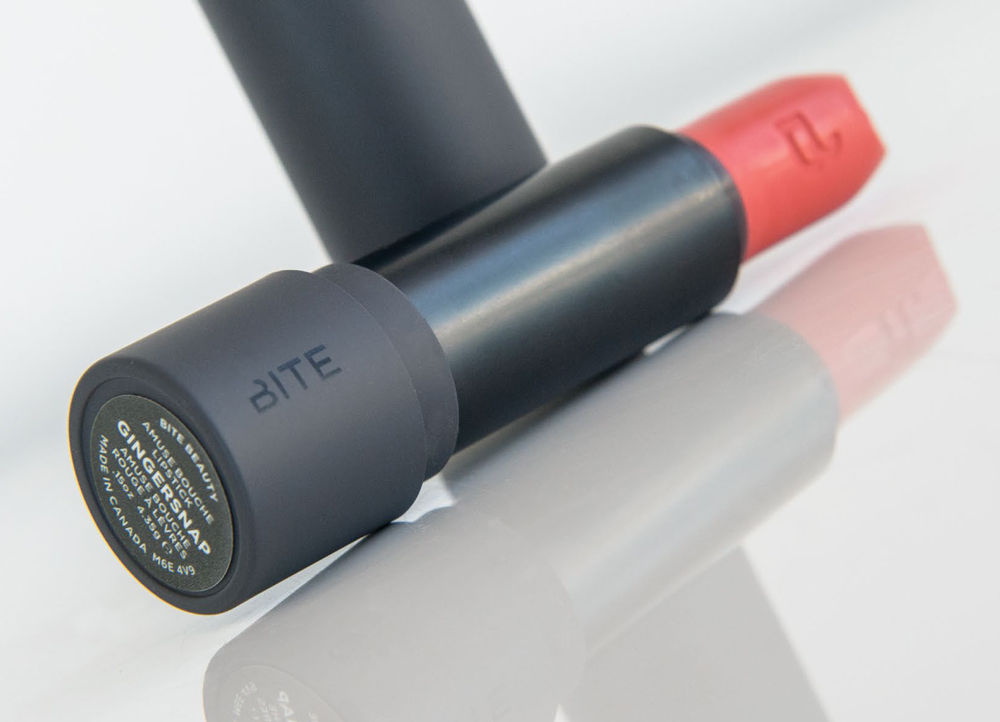 To help position Amuse Bouche properly, Bite founder Susanne Langmuir reunited with her long-time branding and design collaborators at Concrete Design. We spoke with Langmuir and Concrete chief creative officer Diti Katona to walk us through the balancing act of communicating that Bite was still the same product consumers loved. But totally different. But the same.

DITI KATONA: You can imagine how terrified Sephora or the owner of the company was, thinking, ‘Oh my god, you’re discontinuing something that everybody loves to introduce something else!’ And that’s really hard to do because it’s not an extension of the line; it is the main core line.

SUSANNE LANGMUIR: People were really ticked off, [saying] ‘I’m going to move on from Bite!’ So it was quite a challenge to reinvent as a lipstick brand so quickly after its inception [five years ago]. There was a lot of fear, negativity, concern, and a bit of doubt as to whether we were doing the right thing.

DITI: Some people whined, of course, because I would too. They got rid of one of my favourite colours too, Apricot! Which is really funny but that’s okay, whatever, there are other ones. I think people love change, and I think that what can be appreciated is that [Susanne] is always looking for newer and better ways to do things.

Concrete developed new packaging, an Amuse Bouche microsite, and a series of online teaser videos. A full redesign of the main Bite site was also in the works at the time of this interview.

DITI: We came up with a whole new campaign and a whole new attitude and look towards this launch. We made it all a little bit more—I don’t know if the right word is ‘serious’—but a little bit more mysterious and serious instead of cheeky and fun, which is what the first one was like. 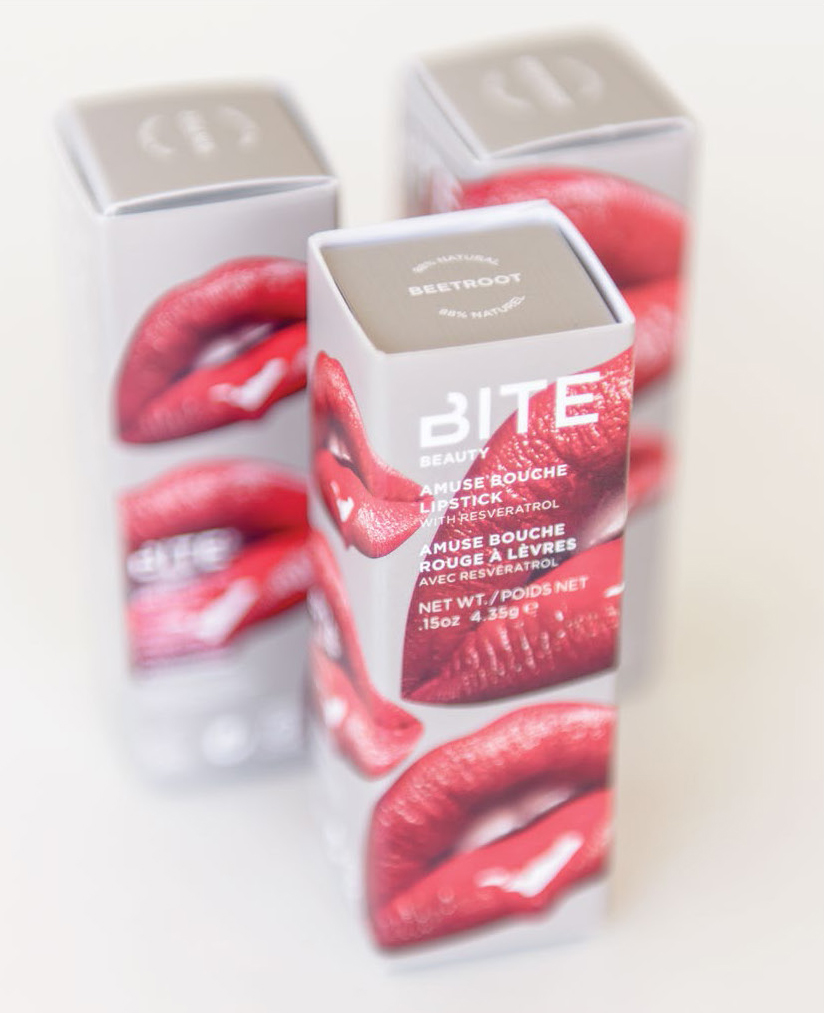 While the Bite logo remains the same for continuity, packaging was redesigned with a sexy new motif.

DITI: What we did was indicate the new packaging with bellybands. Because this new formula is incredibly moisturizing—and because of its citrus oils and new ingredients—we showed a pattern of lips with moisture on them. It has a bit of that Rocky Horror Picture Show vibe, but I love it, that’s one of my favourite movies.

SUSANNE: Diti’s reaction was ‘We have to make it more edgy.’ I always joke it’s a lot like skiing; when you’re going down a hill and you feel you’re out of control, your instinct might be to lean back. Diti’s instinct is always to lean forward. Get into it, that’s your time to be disruptive and bold, and to be true to the brand…

So the lips on the box—when I saw it I loved it, I knew it was right. But it’s a bit disruptive. The entire campaign is a really good balance of disruptive but beautiful, and still very sophisticated. The models that we shoot and that Diti picks are a bit irregular and normal at the same time. We don’t over-retouch. Diti, the entire Concrete team, pushes me out of my comfort zone all the time. I’ve learned that that’s not a bad thing. I think it takes a really good relationship and a lot of trust to be able to do that, because while you’re going through that process, the same way people were upset that we were discontinuing our lipsticks, it’s easy to try to make everybody happy. It can be death by a thousand cuts, right? The new lipsticks are encased in Bite’s signature container.

DITI: In beauty, everything is black. Ours is grey. If you look at MAC [Cosmetics packaging], there’s a reason why they pick black because the componentry is really hard to get in custom colours and keep consistent. All you have to do is go to Sephora.com and look at the packaging, it’s almost always black, it’s just an easier colour to replicate over and over again. Ours is a custom colour, a custom Bite grey. It’s one factory that does it. And then it has that custom finish to it—when you touch it, it’s really soft like suede. That’s all custom.

Aside from packages for the consumer market, Concrete created a special edition containing the entire product line, which was sent to beauty editors to help get the word out. A bellyband featuring photos of models is removed to reveal a sleek black box. When opened, a product sheet showcases the new lipstick shades, and a photo of food connects it to the idea of edible ingredients. 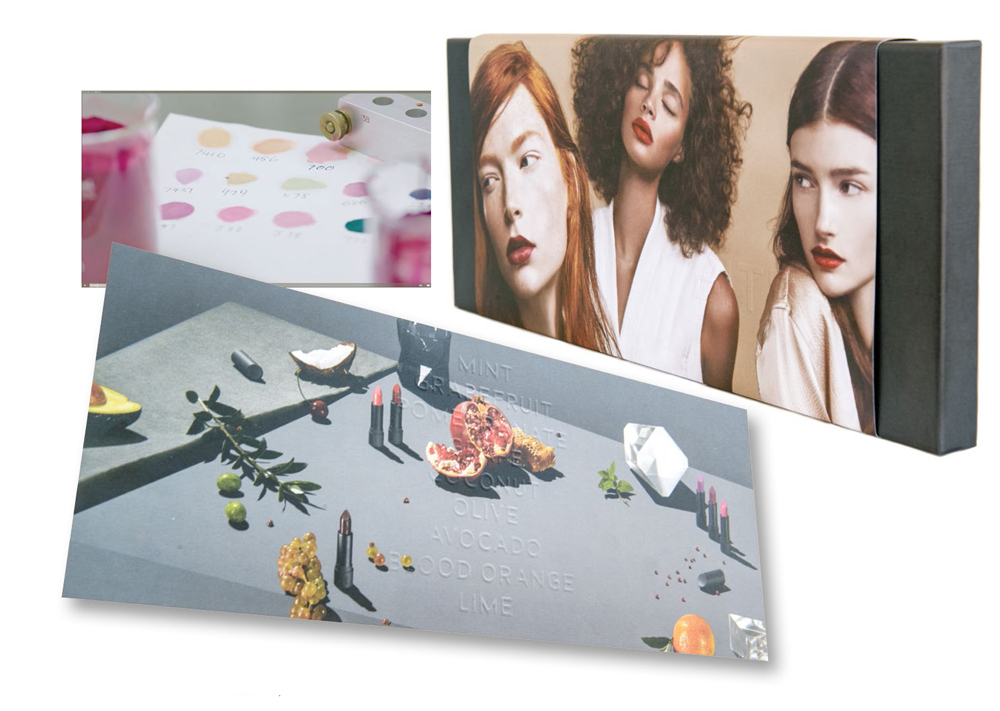 DITI: We did a modern take on a classical genre painting of food. That tabletop setting that you see when you open the box, it’s got a modern bent to it but it is based on classical Dutch paintings of food. We wanted to show food, but not in that ‘natural farm’ way because that’s not what it’s about.

It’s about the actual ingredients, and the fact that you could actually eat these lipsticks if you wanted to. Everything is FDA approved; there’s nothing in it that’s not ingestible. You get that point across and play with that idea of an amuse bouche, which is really sort of a surprise for your senses, a special thing a chef [serves] before meal courses to start you off.

The teaser videos walk a tightrope, leaning on industrial imagery of the product being created—colourful liquids swirling and splashing—but featuring models and aggressive beat-driven music. The aesthetic is different enough from typical cosmetic ads to stand out, but familiar enough that viewers know what is being advertised.

DITI: I like to call it this: hand-made high tech. [Bite’s] factory is very high tech, even though everything is made by hand. That’s highly unusual, so you’ll see people stirring, and if you look at the video you’ll see people doing things one by one.

I think the music is almost irritating, and that’s why it’s kind of cool. It totally contrasts what is happening because you don’t associate that kind of music with hand-made things. Every time you think of ‘hand made,’ you think of someone working in their basement making something cute, right? [But] it’s not pretty music, there is definitely an edge to it… And the splashes of colour are really what make it look ‘fashion.’ It was really important not to look like we’re cutesy and cottage-y.

While some early knee-jerk reactions may have been negative, one look at Bite’s Instagram feed reveals that many consumers are falling for the new line.

DITI: I’m quite fascinated and interested in mass market [because in contrast] there was no focus group for this change. We didn’t sit around doing five designs and calling in groups and spending a year [on it]—the decision was made and we did it. And it’s working! I don’t know how to explain this to huge companies that [tend to] over-analyze things… Very few large companies embrace thinking like [Bite] and are terrified of change because they think people won’t get it. But what I think they don’t understand is that their entire audience has grown up as the MTV generation, and now add on computers and Instagram—if you don’t change and you don’t change faster than you used to, they’ll get bored and move on to the next thing.