Whether it’s crafty labels for the best local brews, cultural and community-driven projects in Guelph, Ontario, or promotions for her favourite brands and bands, Cai Sepulis likes what she likes.

Over a couple of cold ones at Guelph-based Royal City Brewing Co., one of her loyal clients, the designer/illustrator shares how she crafted her perfect client base and became the go-to Beer Woman

Designedge Canada: You go back and forth between Guelph and Toronto for work. Is there much of a design scene in Guelph?

Cai Sepulis: There is, in the sense that there are lots of solo designers in town and they have their own networking group where they get together once a month and have beers. And it’s crazy too, the lack of overlap. You’d think that with 30 other independent designers in town that they’d all be vying [for the same clients], but everybody has their own little niche that they work in.

And your niche is?

When did you know you wanted to move in that direction, and how did you make it happen?

I always loved beer. It was just one of those things, I was always putting feelers out and making friends with all the breweries because I was out drinking a lot. The first job I did [in that sphere] was for a little nanobrewery—and they never really became anything—but I remember after doing that I was like, “Oh my god, this is the dream job!” I don’t know if it was just that I put that energy out into the universe, but now I’ve become ‘The Beer Woman.’

Is it the beer itself that attracts you, or the scene–the breweries and the craft drinkers?

That’s a good question. I love the scene and how collaborative it is. It’s an industry where everyone is competing against each other, but there are also so many collaborations that happen. If the guys from Wellington [Brewery] came in here [to Royal City Brewing Co.], they’d just sit at the bar and have a beer, it wouldn’t be like the Coca-Cola guy being caught drinking Pepsi. Everybody is really curious and wants to know what other people are doing, everybody wants to try different combinations, so I think that’s what I really love about the beer industry, just how open it is.

At times I would worry about crossover—is the client going to be upset that I’m working with somebody in the same industry? Because it’s not like I usually have a non-compete clause. Would they really care? I was worried about that initially but they were like, “No, go for it! This is great!” 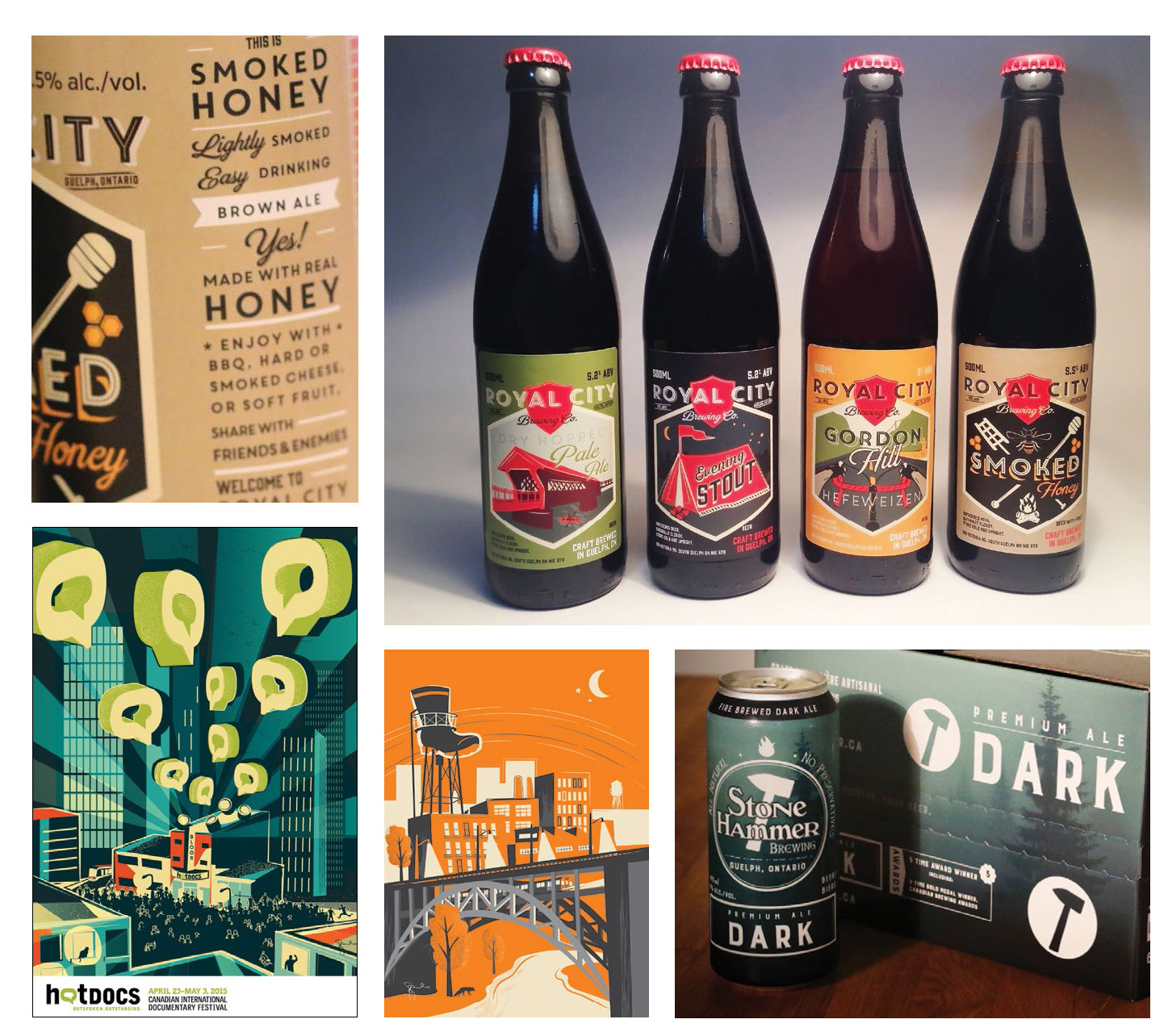 Do you have other personal interests that you’ve spun into design or illustration work?

It’s hard. I love the outdoors. I love kayaking. I love the environment. But it’s one of those things; I don’t really want to be working in non-profits. I actually doreally like advertising, as capitalist as it is to say. I love selling things, I love seeing my art on products, I love going to bookstores and seeing my work on books, I love seeing my work on labels. And I guess that’s kind of egotistical to say, but it’s one of the driving things I love about my job.

A common industry grip is that clients aren’t as adventurous as designers would like them to be. The craft beer market stood out because it seemed like pushing the envelope was becoming the norm. Is that still the case?

I’d say so. I think that this beer [from Royal City Brewing Co.] has been such a success because even though the illustrations are so different, there is that consistency with the hex and the way that the cans are laid out, and I know that’s something that the LCBO has been pretty happy about, saying, ‘Ok, we know when your beer is on the shelf. This is your beer.’ Whereas I think a lot of other breweries are experimenting so much with their labels that there is no consistency from beer to beer except maybe a little logo in the corner. Well, you’ve got to keep some sort of brand consistency to actually build the recognition that you need.

How do you approach designing a craft beer package? How do you make it stand out?

I ask, “Who is going to be drinking this beer, who is going to be the audience for it?” One project to look at would be another brewer in town, StoneHammer [Brewing]. They’re such a different brewery [compared to Royal City Brewing Co.], there’s so much history… I have a friend in town who is a blacksmith and he has this incredible beard, he’s the most manly man. I was like, this guy is going to be drinking this beer in the woods! And so that’s what I tried to focus on when I was working on that packaging.

It was interesting, because you know how now [some brands] have those plastic wraps on cans? That’s sort of a newer technology. Before you had to be using silk screens and spot tones, and you worried about limiting your colours. When I was doing the StoneHammer one, right off the bat they were doing these sleeves. For me, that was brilliant because I was able to do one of the first cans to use a photograph as a background. So that’s kind of neat… everything else is so illustrated.

What advice would you give to a young designer who wanted to turn a personal interest into a specialty?

If someone was really into karate, find a place that does karate because I feel like if you’re working on something that is your passion, you’re not always focused on the money. You would just have to suck it up and go talk to them. I think that’s the obstacle that people starting out have because I think a lot of designers are introverted. You’re into process and theory, and you’re into designing and being creative, but then running a business? You have to have that ability to go out and talk to somebody.

And it’s not even that you need to go out there and be like, “You need a logo!” It’s about being comfortable just introducing yourself, and not having expectations that something’s definitely going to happen. I remember starting out too; I contacted so many different people. I remember contacting StoneHammer years ago, because their old labels were just horrendous, and then not hearing anything back. And I’m glad they didn’t do it then because I don’t think my skills were what they were when I eventually did rebrand them. I would probably tweet them, or I would go out to an event [to meet them in person]. Especially when you’re starting out and they have no idea who you are, it’s about trying to figure out how to make that connection with somebody.

How would you describe your illustration style?

I think it is kind of retro, whimsical, architectural, with really subdued colours.

How did you develop your style? Did you formally study illustration in school?

My first degree was in philosophy… but I actually started with a commerce degree and then switched to philosophy and then after that I started doing some fine art. I started designing my own postcards for little restaurant shows and stuff [like that], and then it turned out that the other seasoned artist in town had seen the design work that I had done for myself, so I started designing postcards for them. And then it was soon after that that Penguin Books found me, and so things spun out of that.

I ended up going back to school for architecture, and I thought I would transition into doing more interior design, working with businesses while they’re starting up, doing their branding… But then I found in architecture school that I developed an illustration style that was really needed, doing a lot of architecture icons, buildings.

So now I’m also working on lots of maps… It’s funny because pre-architecture school, [my illustration style] was really wonky and the lines were crazy. But now everything is so precise. It was such a crazy education. I was actually the worst drawer there. I was already working as an illustrator/designer, and some of the things these people could do with just a pencil? It was unbelievable. We could be just shading a sphere, and I would be like, “I have no idea [how to do this]… Let me turn it into a vector.” If anybody was interested in it, I would say yes, go to architecture school!