While the internet is awash with infographics, FFunction stands out by seeing the bigger picture

There’s a brightly sunlit office on the outskirts of Montreal’s Outremont neighbourhood, right on the cusp of trendy Mile Ex—the city’s corporate playground for bespectacled designers. A frame on the wall lays out a diagram with a brightly coloured sketch of a honeybee. Byron the French spaniel wanders about aimlessly in search of some kind of raison d’être. Workers huddle at their desks. This is the home of data visualization (“data viz”) geeks Sébastien Pierre and Audrée Lapierre, founding partners of FFunction. 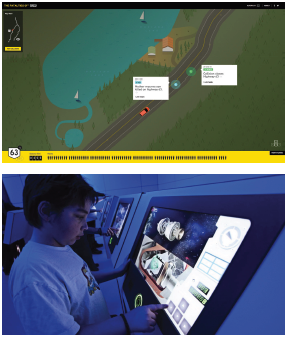 “Think of data as an unmapped territory,” Pierre is explaining. “By creating a visualization, it’s like you’re sending someone to a new country… Is it better for them to discover stuff by themselves? Or to be guided and have signposts?”

“It’s actually like writing,” Lapierre jumps in. “Over the years we’ve discovered that we need to have a narrative integrated in the interactive work. You want to have a story.”

FFunction’s data-driven storytelling catalogue is a colourful collection of social good and non-profit commissions: interactive presentations to promote cancer prevention, environmental awareness initiatives, a report about the U.S. water infrastructure crisis. But rather than laying out corporate-looking visuals like a row of insipid cartoon ducks, FFunction aims to seduce users with easy-to-navigate interactive elements that ignite and re-engage with information. Users hopefully come to see the data in a new way, with greater clarity.

“One of the things that pushed me to create FFunction was to use data to understand our environment,” Pierre explains. What is their process? Each assignment begins with creative brainstorming to establish clear goals, followed by conceptual analysis of available data and the development of a schema. Afterwards comes a deeper “data dive”—the running of algorithms to understand relevant dimensions and quantities. 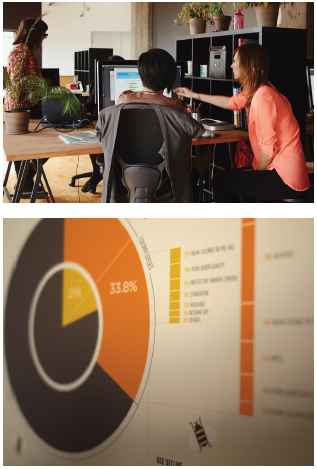 Pierre thinks of their designs as a vehicle for insight. A talkative fellow, he regales me with a ten-minute long tale of his early student foray into the world of data viz. It was a time when the field didn’t even formally exist yet and his professors in France doubted his direction into the unknown. ‘Relax and you will see,’ he told them with Zen certainty. Two days after graduation, he was on a plane to Canada.

Pierre and Lapierre (a name-match made in heaven if ever there was one) met before FFunction was formed, when Pierre attended a design presentation at Université du Québec à Montréal hunting for a candidate with typographic skills. “People coming out of a design background rarely have training in the formal representation of things—except typography, where there’s a reason things are created one way or another,” he explains. He zeroed in on Lapierre’s carefully wrought typographic journaling project and introduced himself.

“I had no idea what data visualization was in 2008 but I looked at Pierre’s work and was like, ‘This is crazy!’” Lapierre says and laughs. They have a strong working relationship; the two finish each other’s sentences with ease and say that thus far their only creative point of contention has been an issue with bevels, which they seem to have worked out admirably.

From their wide range of projects, Lapierre is quick to claim Earth Insights as her favourite. Developed for HP, the interactive site presents a surfeit of photos of different species in their natural habitats to show the loss of biodiversity. Among their most successful works, it won recognition at AIGA and Lapierre has presented it at a number of conferences. Earlier this year, Disney featured it at the Animal Kingdom Theme Park in Florida.

For Pierre, the studio’s work offers an invaluable means of putting the spotlight on political issues and potentially putting the wheels in motion for change. “There are some really big systemic issues that have not been discussed on an objective or factual level,” he says, “and there is a lot of potential to solve or at least better understand them.” •

This article originally appeared in the September/October 2015 issue of Designedge Canada magazine.