Out On a Limb: Are you innovating just for the sake of change?

As designers and developers we’re always tackling things we have n’t quite done before. While it is quite possible to make an honourable living doing competent, workmanlike design, we believe there is real value in going out on a limb. And not just getting one’s individual creative juices flowing, but encouraging your fellow travellers and collaborators to push the envelope along with you.

Ok, we’re designers, not brain surgeons or rocket scientists. We are not likely to save your life but maybe we can change perceptions in the world. Salesmen, propagandists and religious leaders have known this since the beginning of recorded time. Concepts translated into a visual medium have power. Power to sell an idea. A power that can be used for good or evil. Sometimes delivering that visual message calls for a leap in technology, or if not a leap, a nudge forward.

Back in the day, we used our hands to smear pigment onto the rock face of a cave. Then some artist pushed the envelope and worked out that if you mucked around with a clump of horse hair or a feather, it offered more flexibility than a finger. Fast forward in time and we see clay tablets, vellum, papyrus, paint brushes, illuminated manuscripts, stretched canvas, egg tempera, the printing press, photography, computer tech and software. Imagine if those early artists had been complacent, content with just a finger.

The Atlantic published an interesting list of the top 50 breakthroughs since the wheel back in November 2013. The editors asked the million-dollar question: can innovation in the material and productive realms be sustained? More pointedly, they make a query that weighs heavily on a creative soul, namely whether music, architecture, literature, the fine arts and other manifestations of world culture merely change, without necessarily improving. When trying to achieve something new, are we simply selling the emperor a new set of conceptual clothes, or are we striving for something of substance? 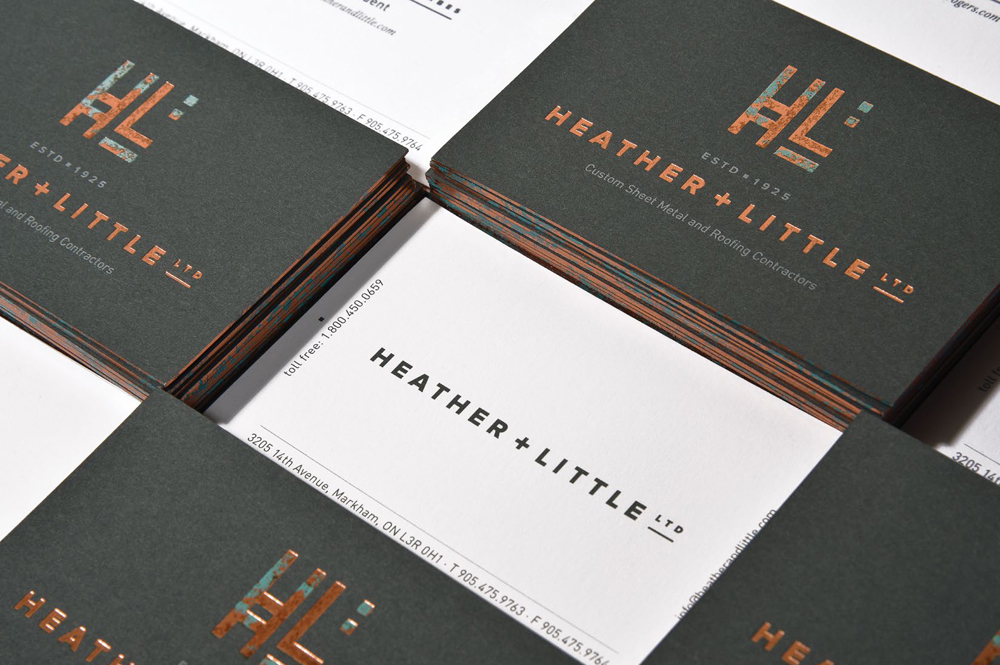 We recently lived through one of these moments when we designed a new identity for a metal fabrication company called Heather & Little. We wanted to create something that reflected the company’s craftsmanship, attention to detail, metier and heritage and were influenced by craftsman elements in the work of Charles Rennie Mackintosh, the Scottish Post-Impressionist designer. The result was a logo inspired by the craftsman style with a nod to copper and verdigris patina. Although we pitched a couple of options to the client, they gravitated to the one we were all in love with. When we showed the design to the print guys, their reaction was universally, “We’ve never seen this done before.”

Some declined to participate but we found a couple of shops prepared to quote on the gig. The client chose one, and thus began a tale of exploration and experimentation. The process reinforced that breakthroughs don’t happen in a vacuum. One innovation follows on the coattails of the ones that came before it, reinforced by collaboration. Said Ian Budge from Flash Reproductions, the project’s printer, “Jobs like this are like physical workouts—you really don’t want to do them, they don’t always feel great when you’re in the middle of them, they hurt like crazy when you’re done…but in the end, you come out better and stronger than ever.” At the end of the day, who cares that we designed a nifty logo and that the printer was able to manifest the design on paper?

From our perspective, we were able to create a product that well suits our client; to use design for good not evil. The client has a tool that is a corporate envoy for their brand that honestly speaks to them and about them in a way that makes them feel like they should about a business they love and are good at. As designers and printers, when the job gets done right and the message is clear and beautiful, the pain fades away and makes up for the times when you don’t have the opportunity to run with a project. It’s the kind of win that makes you sure your work is about making improvements, not just changes.

James Wilson is the principal of Overdrive Design, located in Toronto’s Junction district. Leslie Jennings is a writer who sits next to James at Overdrive. (Photo: Justin Morris)