Want your own copy of CBC’s 1974 Graphic Standards Manual? 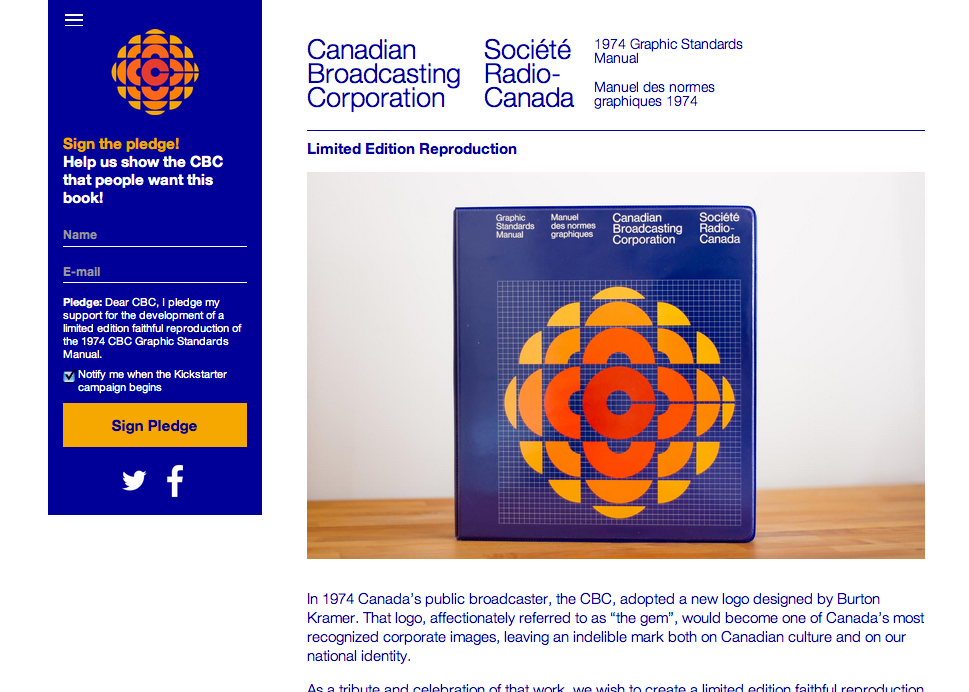 Jean, past president of the Society of Graphic Designers of Canada (GDC), pitched the idea to CBC. According to a CBC Arts report, the pubic broadcaster’s interest was piqued, but before seriously considering the project CBC wanted Jean to demonstrate audience interest. He hopes to do so through the project’s website unveiled in July.

Deep Roots: Heather Cooper’s life in Canadian art and design
Indelible Icons: In conversation with Jim Donoahue
Taking it back to ’76

The project is in line with recent interest in vintage brand books, and Jean says it would be a way to celebrate Kramer, the cultural impact of the iconic identity design, and Canadian heritage as a whole.

Over the years I became actively involved in my national professional association (GDC) where I was able to connect with national and international design communities. That experience sparked in me a growing curiosity about Canada’s design heritage.

I then recently saw the great revival work on the NYC Subway and NASA identity manuals and immediately wondered why Canada’s rich design heritage is not being celebrated and shared in this same way. So I searched for examples of iconic Canadian identity design and naturally came across Mr. Kramer’s work on the 1974 CBC identity.

This project is my way of helping today’s generation of designers connect to and learn from Canada’s design pedigree, as well as honour the work of Mr. Kramer and celebrate an identity that has become part of our culture, and more recently, part of our official national heritage.

The teaser site looks to generate 1,000 pledges of support, after which Jean hopes CBC will allow him to crowdsource funding for a print run. Kramer, who received the ADCC Les Usherwood lifetime achievement award last year, was the first pledge.