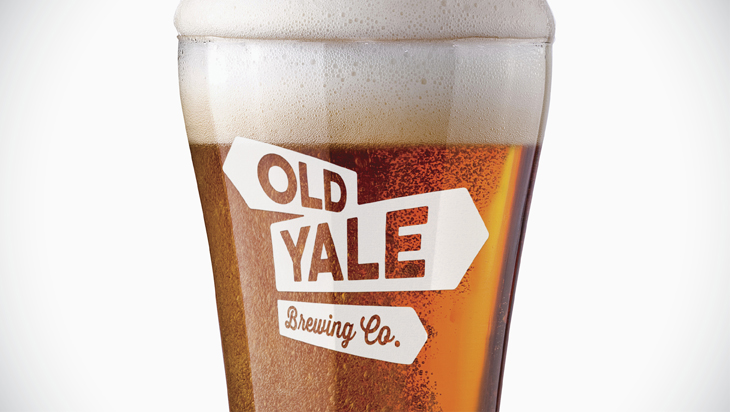 Lift a bottle or two for Subplot Design. Led by directors Matthew Clark and Roy White, the Vancouver firm captured the attention of the Redgees Legacy Awards judges and earned the highest score of the competition across all categories and regions.

To toast the occasion, we called up creative director Clark and designer Liz Wurzinger to chat about the most recent project included in their company’s Legacy portfolio, the 2014 brand identity and packaging design for Old Yale Brewing Co.

Established in 1999, Old Yale was at a plateau. “They were in that typical place of a craft brewery,” says Clark, “where they couldn’t make it to the next level.” Old Yale asked Subplot for a deep reconsideration of the brand’s messaging and strategy, resulting in a new logomark, a reinvigorated core line of products for consumers new to the craft world, and a new haunting approach for a ‘Tall Tale Series’ aimed at more experienced and adventurous beer drinkers. All were inspired by the great outdoors. 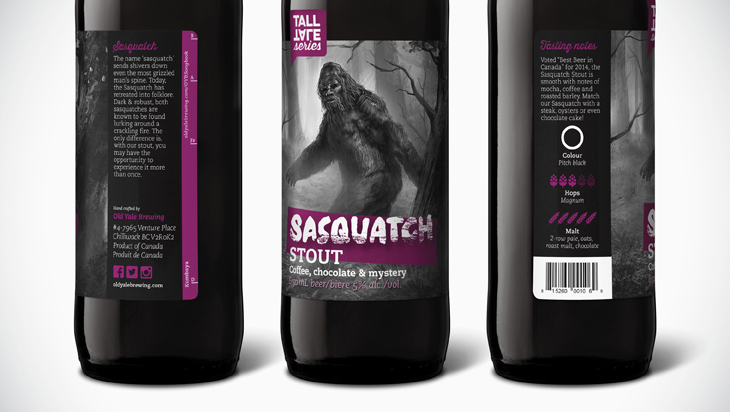 Matthew Clark: One of the insights we had at the beginning of the branding stage was realizing that, in this crazy surge of craft breweries, the vast majority of them are urban. It really is an urban, hipster thing… So we said look, in Chilliwack, B.C. where you guys [Old Yale] are from, it’s as rural as it gets. Let’s celebrate that in the brand. The logo and the identity became that signpost—it’s directional, it’s in the middle of the woods.

MC: For the core you can see it was obviously aiming for scout badges. It was tough to get the look right even though it’s a common look. The fun part was actually after we had the illustrator [Dan Schlitzkus] do them, we sent them to an embroidery shop and had them made into real badges that we then photographed and put on the labels…

Originally we thought to get the badges made double-sized and then we’d shrink them down, that way all the stitching will be good and they’ll look more perfect. But after getting samples from the stitching company, we did experiments taking their badges and photographing them at 100% size and then shrinking them, and they were in fact too perfect when you shrunk them down. And so the amazing thing is [for the final version] they were stitched at exactly the size on the bottle, and the fidelity was incredible. 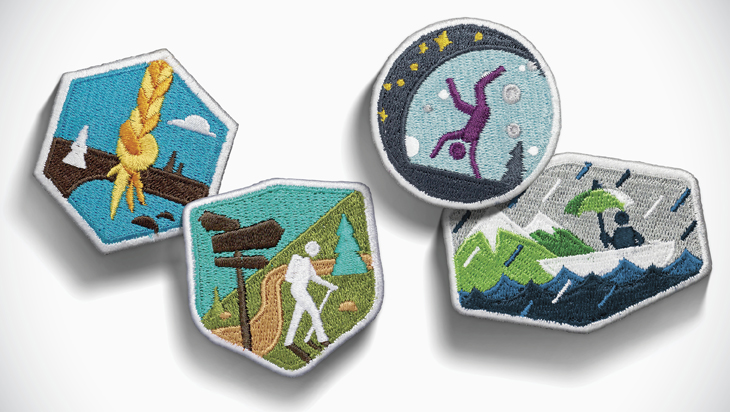 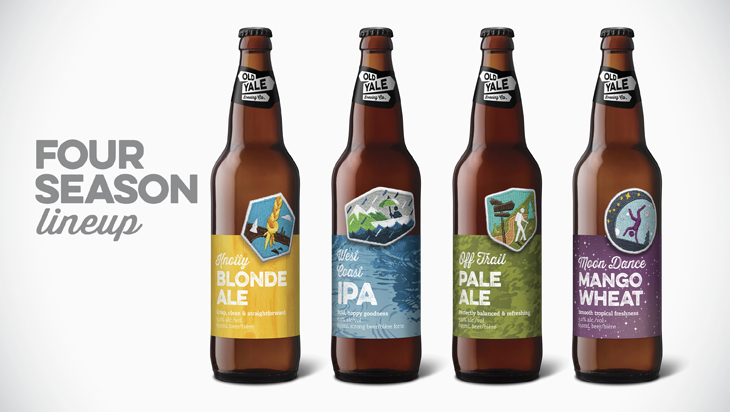 Old Yale’s core lineup was given a summer camp feel

Liz Wurzinger: I remember when we first presented the concept we showed them a lot of different illustration styles. We originally wanted to go much more quirky and much more graphic… but funnily enough the concept they were drawn most to was one of the original sketches I did with pencil—a really rough sketch. That was the driver for the illustration style we went with. We actually commissioned the illustrations in colour but ended up using them in black and white. The shelf is so overloaded with colour so we thought black and white would stand out much more.

MC: We did about a thousand tests. What you can’t tell from the images is that the background on all the Tall Tales illustrations is actually silver ink, so it’s black and silver. It’s got a lot of shine and dimension and it gives it even more of that spooky, weird, reflective, ethereal look. And gosh, we did more tests than I think the printer was expecting us to [laughs]…

As much as we humanly could, we gave all of the Tall Tales a very local tie-in. We’re trying not to do a Loch Ness Monster or something like that—they are all local legends.

LW: For the Screaming Banshee we cheated a little, because it’s an Irish stout.

MC: Yeah, we figured a banshee could haunt anyone [laughs]. It can travel. 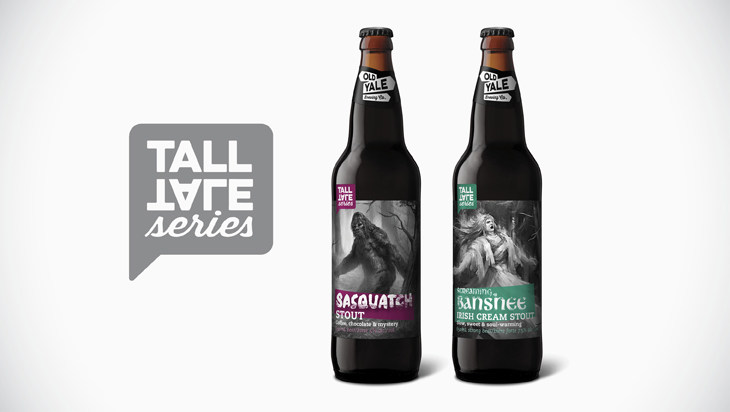 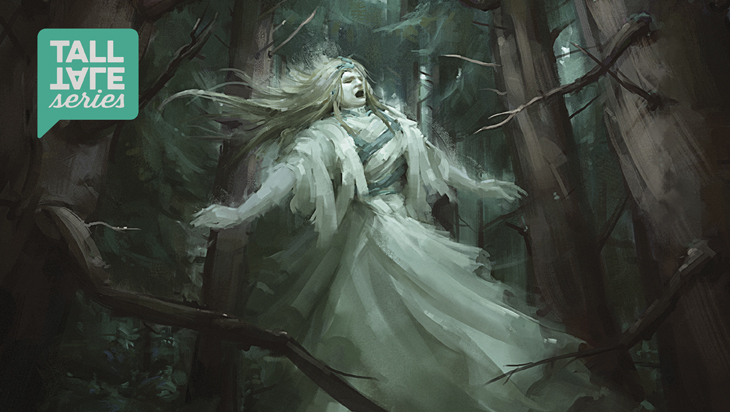 Each label contains a playful surprise: fill lines that indicate musical notes for various campfire songs. Empty a bottle to a line and blow into the bottleneck to play that note.

MC: I always thought it would be great to turn bottles into musical instruments. The trick was, you have this abstract idea, but now you’ve got to make sure that you can actually get the right number of notes within the space of a label. [With] the bottle you could probably get two full octaves between the top and the bottom, [but] I’m only able to demark notes on the label. And the core label, you can see, is even shorter [than the Tall Tale labels]. So we had to not only find campfire songs that would be realistic but also had to be public domain and had to be played on a limited scale… They’re pretty fun and very silly, and in the design community you can imagine that’s [the element] that a lot of people have gotten excited about, that little hidden aspect. •

Since launching its new identity and packaging, Old Yale Brewing Co.’s sales have increased 79.5% overall with a 71% increase in bottle and can sales in B.C. Tap accounts have also risen, by 88%. “Although of course we designers would like to take credit for everything, we have to share the kudos,” says Subplot Design’s Matthew Clark. “At the same time we were doing this project they were also radically overhauling their relationships with distribution partners… They were just in their local area [before], and now they’re clear across the province.” Last year, Sasquatch Stout won Beer of the Year at the Canadian Brewing Awards. Old Yale has been quick to capitalize on the renewed excitement around the brand: a Vanishing Monk witbier joined the Tall Tale lineup earlier this year, and Clark says a new devilfish-themed brew is next to launch.*

*A version of this article originally appeared in the November/December 2016 issue of Designedge Canada magazine.