Re:Brand – DeSerres brings art back to their branding

If you buy art supplies, then you probably know about DeSerres. This is one of Canada’s premier places to get your art on, and recently the company released an update of their old logo. It’s a modern treatment that pays homage to the original, but some people are not convinced. Let’s take a look at how this logo came to be:

Part of the reason that DeSerres is so well known and respected in Canada is that it’s been around forever. In 1908, the company was founded by Omer DeSerres, and his full name was the branding associated with the business for most of its history. It wasn’t until 2008 (the 100-year anniversary) that the Omer was dropped in favor of a more condensed logo.

For the past century, DeSerres has been managed by three generations of family, with Marc DeSerres being the latest. Although they changed the logo on their anniversary, it was time to update it for a modern era. 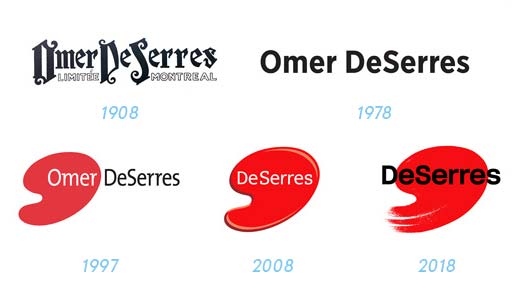 Why the New Logo?

Unfortunately, the 2008 redesign left a lot to be desired. Rather than carrying the weight of a century of success, it felt almost like a clip art rendering of what it should be. With highlights and an intense borderline that suggested a plastic toy, it was not the best iteration.

So, with the help of LG2, DeSerres sought to keep the fundamental elements of the logo while making it more authentic. As one of the largest independent ad agencies in Canada, LG2 has quite the portfolio of logos and branding materials for a wide range of companies.

According to General Manager Pénélope Fournier, the goal of this redesign was to capture the artistic elements that DeSerres offers its customers and showcase the creative process.

The result is a considerable improvement – Subtle, but significant.

The animated version of this logo helps solidify these themes and creates a more energetic and playful result.

So what are people saying about the new logo? Was all of the effort worth it, or should they have stuck with the old?

Reactions from the field

While we can definitively say that the new version is better than the 2008 image, there are some valid points raised by detractors. Most notably, that the art-medium elements used to bring variety to the logo application feel sterile and inauthentic. Rather than using the materials that they are trying to emulate (colored pencils, paint brushes, etc.), it seems like they utilized digital versions of the same, which seems antithetical to the core of the brand itself:

“The different styles (pencil, aerosol especially) seem Illustrator-rendered… For an art store, creating real-life applications would be much more in keeping with their whole aesthetic, right?”
– Tuuli Platner

Overall, the reaction is a bit mixed, but we’ll see how it fares over the next 10 years.