The Edmonton International Film Festival just released its new logo and branding campaign in the Fall of 2018. Seeking to strengthen their connection with a younger audience, the campaign plays off of the “feels” that film inspires. In keeping with their mission statement, their new branding emphasizes that films should tell strong stories and transform the way that people see the world. Anger, sadness, surprise and humor are all reflected in the various ad posters.

The festival’s primary goal is to support the appreciation of cinema. They feature more than 150 films from over 50 different countries every fall in Edmonton. Though genre and production type vary, all films are impactful and must be Edmonton premieres.

The FKA agency was tasked with the important job of re-branding The Edmonton International Film Festival. The EIFF was looking for a new and better way to promote this year’s festival as well as their overall presentation. In the past, there had been no real definitive branding for EIFF. Over the years, there were many changes to their logo so FKA was challenged to make a logo that stands out and will stand the test of time. The new logo is simple and elegant, evoking an old-school film reel tape as well as offering balance for the text. The previous logo showed the words “Film Festival” in larger print. It also included half of a Canadian red maple leaf at the far right of the logo. 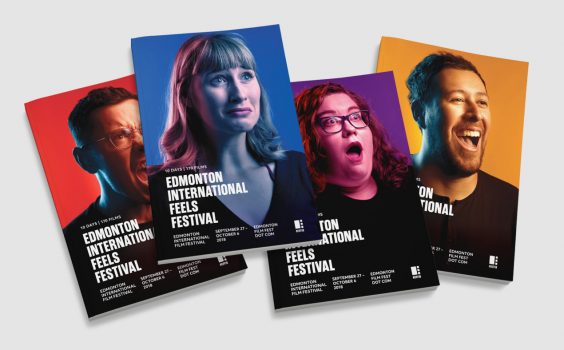 One of the main goals of the EIFF this year was to appeal to a younger audience who will carry on the film festival tradition. FKA literally put a fresh face on the branding by using close up portraits of young, local actors in photographic advertising. The advertising focuses on the concept of emotion being the strongest tie to loving film. Four different ads show the emotions of humor, anger, sadness and surprise that any festival attendees are sure to experience. The colorful ads have received a great response from the public.

FKA’s core values of fun, knowledge and ambition show in their work for the Edmonton International Film Festival. By using a clear and strong logo, the EIFF can settle into their brand and become well-known by their image. Using a fun and youthful photographic ad campaign, they can connect with a younger audience and ensure the festival grows in the years to come.