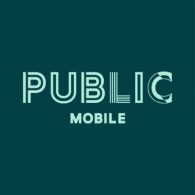 Public Mobile has teamed up with Cossette to unveil a new logo and brand identity forthe marketplace.

According to Cossette, Public Mobile, “works to differentiate itself in the ultra-competitive wireless telco market, Public Mobile has launched a new brand identity with customers and an emphasis on human connection at its core. Working with its [ agency of record ] Cossette, Public has unveiled a new design system that includes a new logo, colours, typography and illustrations that reinforce the diversity, individuality and interconnectedness of its customers.”

This design overhaul emphasizes both the simplicity of the product offered by Public Mobile, and the friendly and relatable persona the company looks to impress upon its customers.

-In contrast with other mobile companies that charge per minute, Public Mobile offers SIM cards that are flat rates for the period of usage with varying services depending on which plan you buy. The customer gets to choose the time-cap that is offered for the SIM card (10 days, 30 days or 90 days). As part of Canada’s largest mobile network, Public Mobile wants to simplify the way that customers communicate, from coast to coast.

The new design also aims to make Public Mobile stand out from its competitors. The new typography and color palette make for a recognizable branding stance.

In a statement from Public Mobile,  they have, “launched its first campaign under the new branding, ‘Public Displays of Affection,’ a warm and humorous campaign that showcases Public Mobile’s love and commitment to its customers with amazing savings and community.”

Public Mobile’s new look is meant to be modern, fresh, relatable and recognizable.