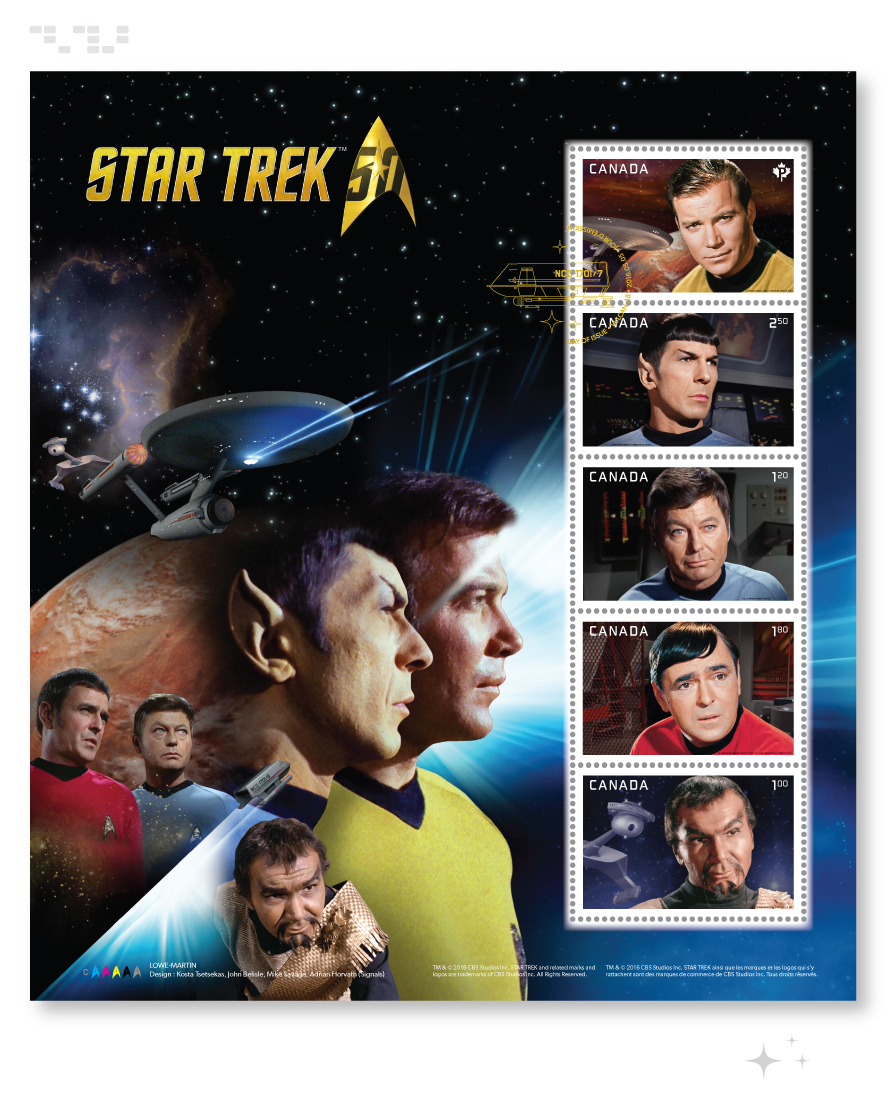 Star Trek: The Original Series is the latest nerd culture landmark to be featured in a Canada Post stamp collection. Designed by Signals Design Group, the stamps celebrate the sci-fi franchise’s 50th anniversary in 2016 and highlight its Canadian connection–Captain Kirk (played by William Shatner), Scotty (James Doohan), and the Klingon Commander Kor (John Colicos) were all played by Canadian actors, not to mention a host of minor characters throughout Star Trek’s three seasons and six movies.

The collection includes traditional stamps and a range of collectible applications such as souvenir booklets, posters and framed prints, animated lenticular stamps, coins and more. 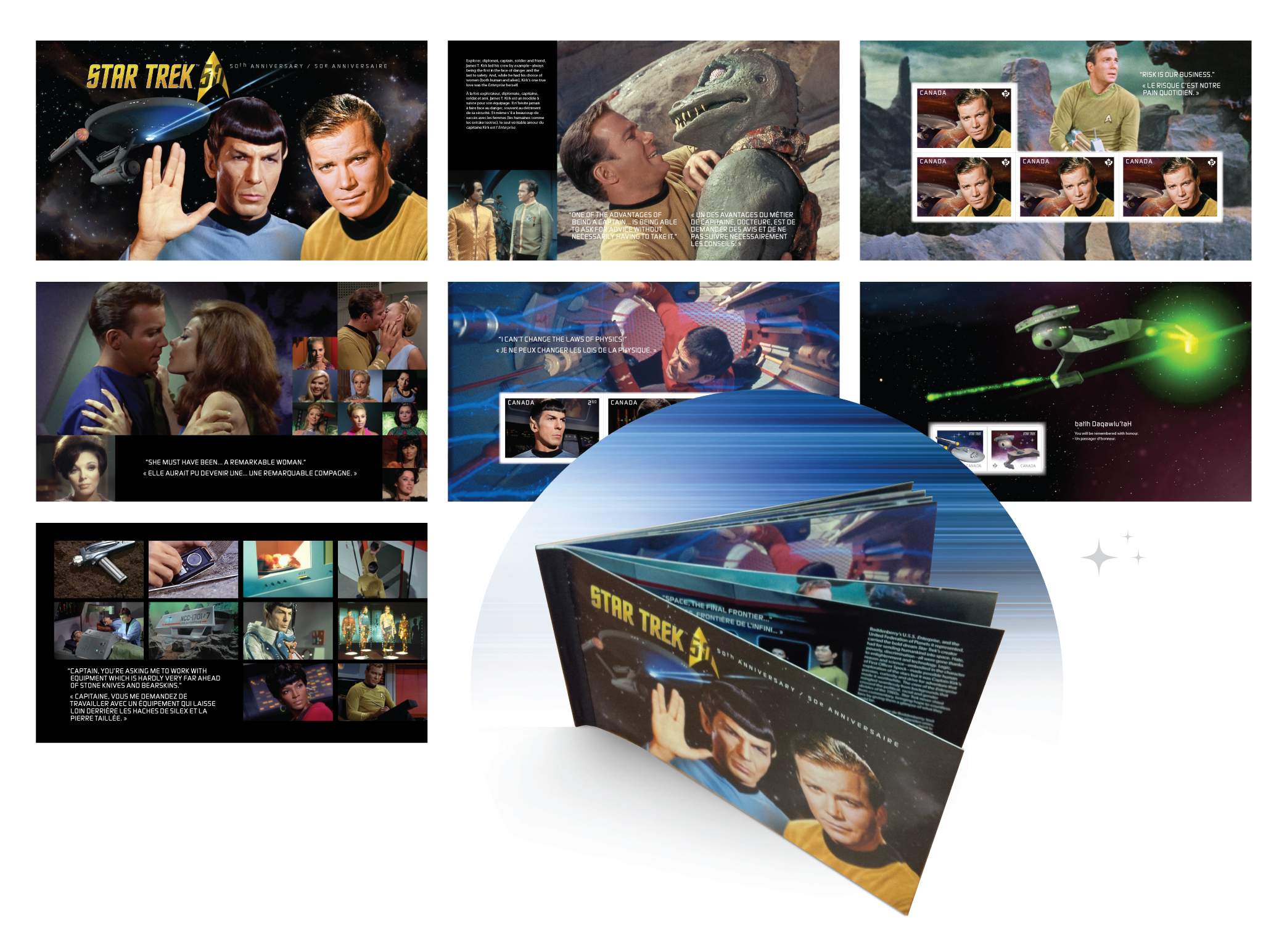 “The sheer volume of imagery was daunting,” said Kosta Tsetsekas, founder and co-principal of Signals Design Group. The studio was granted online access to CBS’ archives, and also used screen grabs from hi-def remastered DVDs to source any specific imagery that was needed. 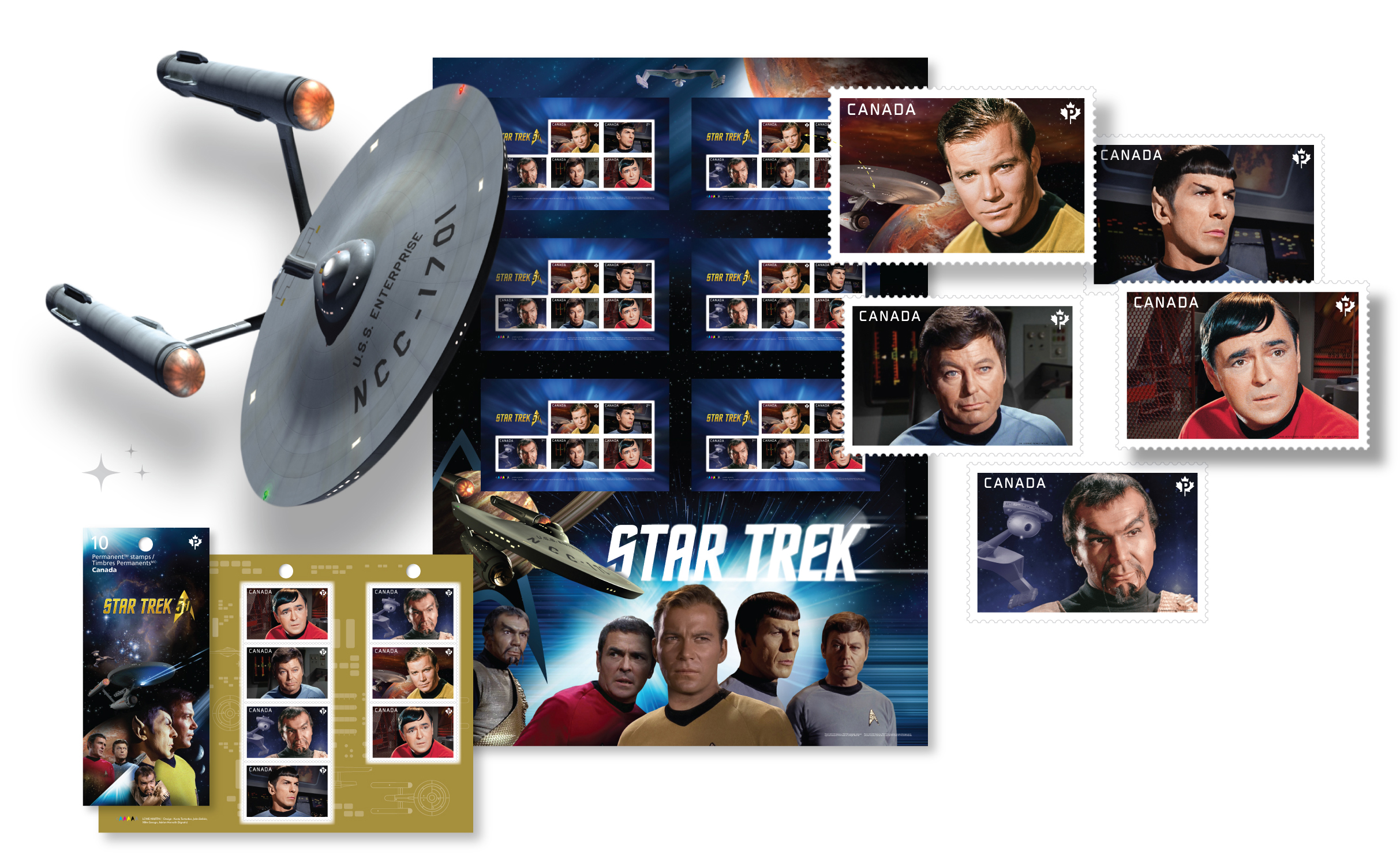 They ended up with over a terabyte of images to choose from. “Signals designer Mike Savage gets all the credit for creating systems for us to capture and sort through all those photos,” Tsetsekas said. “His approach to organizing the images made finding what we needed much less painful than it could have been.” 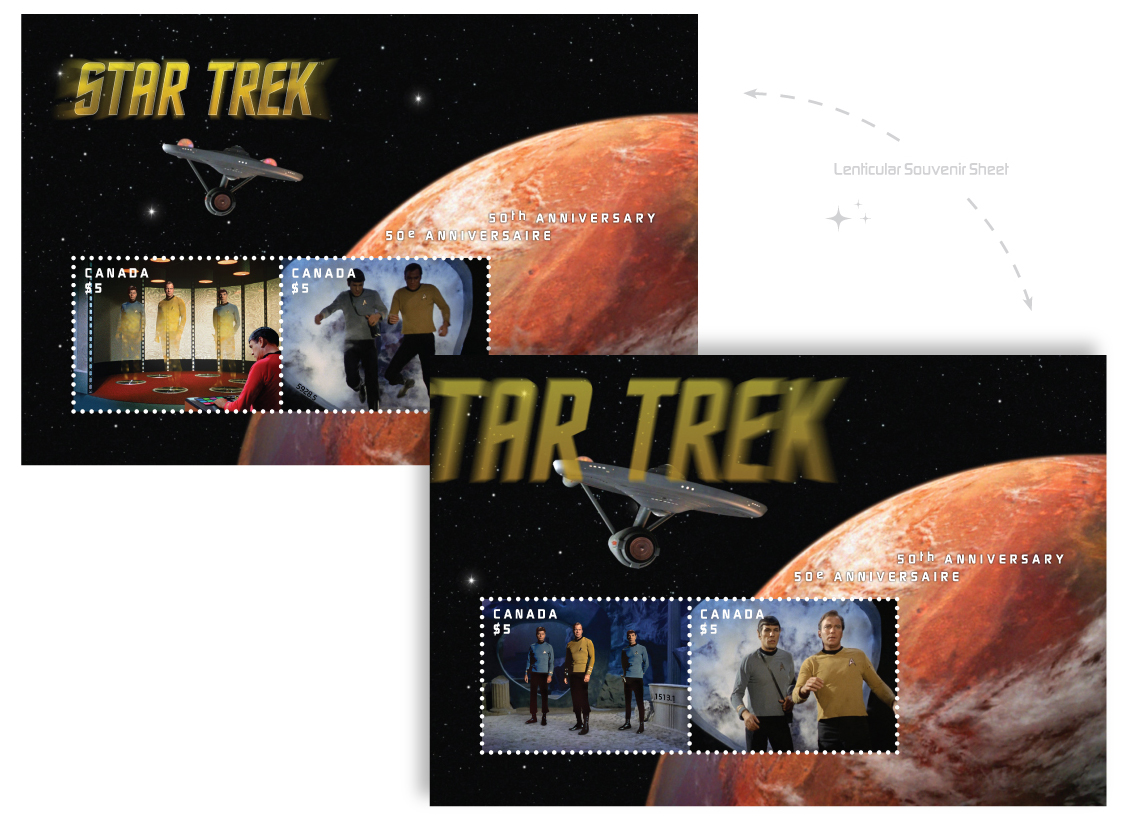 This is the first time Signals has designed animated stamps, which were produced in collaboration with Lowe Martin and lenticular specialist Outer Aspect. “There was a fair bit of back and forth, pushing the animation as much as possible while ensuring it was reproducible on press,” said Tsetsekas. The stamps feature characters teleporting through a transporter, which may have been the most obvious setup to use but was also “by far our favourite” among the four ideas proposed to Canada Post. 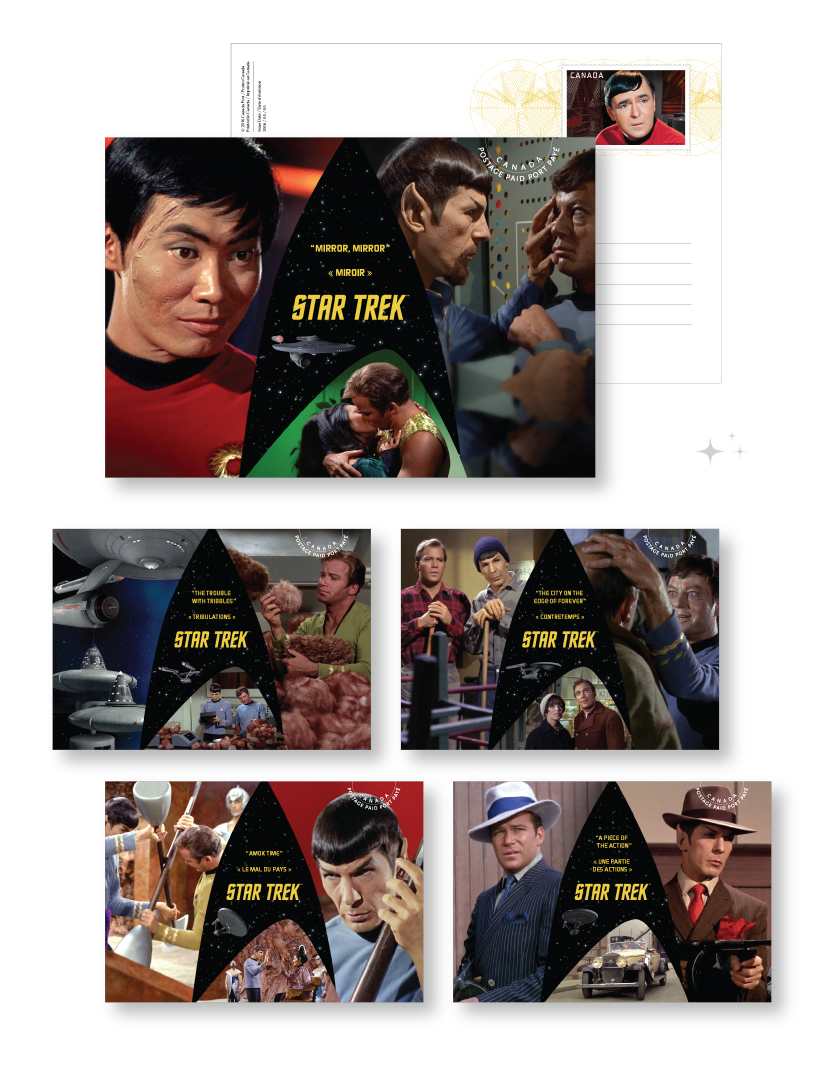 Digital Sans, which Tsetsekas refers to as the “official” Star Trek font, was used for headlines. Since it doesn’t work as well for body text according to Tsetsekas, it was paired with Gibson–another Canadian connection since Gibson was designed by Rod McDonald. 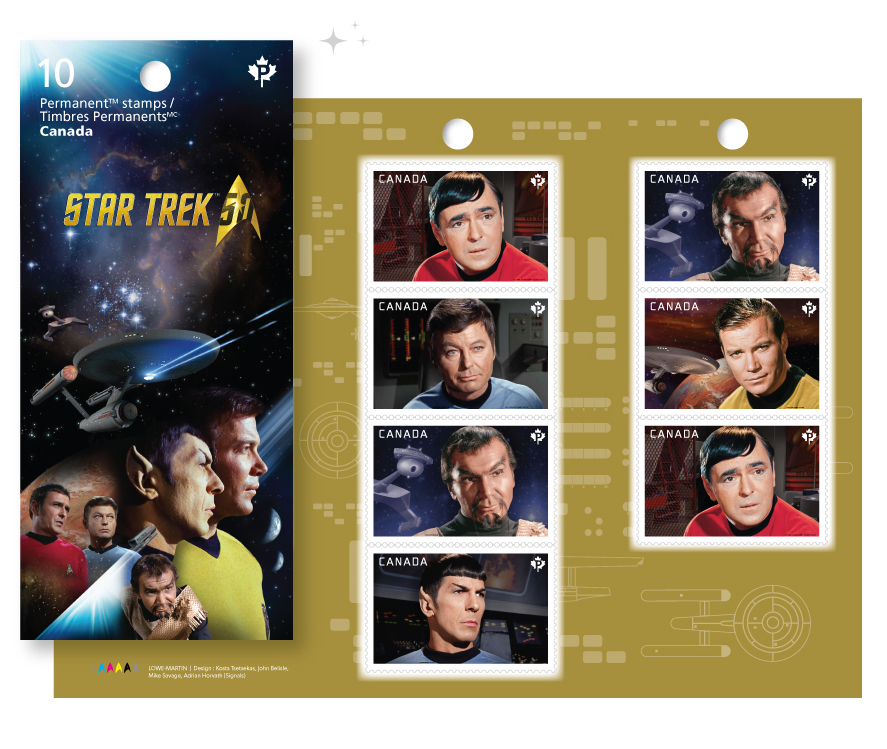 Although Tsetsekas notes this may be the largest issue ever produced by Canada Post, a number of fan favourite characters like Uhura and Sulu are noticeably absent or appear only on posters or in the booklet. He’s aware of these gaps in representation, and said since the main three characters of Spock, Kirk and McCoy were must-haves, the other available real estate was reserved for characters played by Canadians. “As fans, some of these were difficult decisions for sure!” he said. Tsetsekas, his wife and father-in-law are all big Star Trek fans, as are a number of his Signals co-workers. 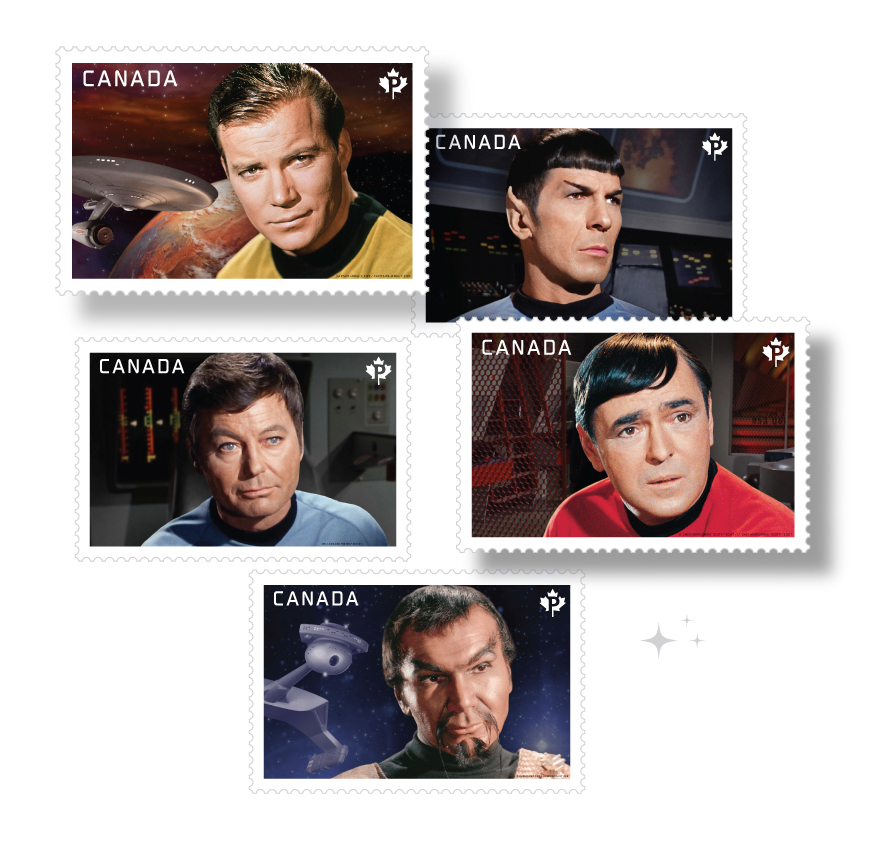 More and more stamp collections are riding the wave of superhero, sci-fi and fantasy fandom in popular culture, including releases for Superman, Batman and Harry Potter. “Because of the large drop-off in mail volume, many postal authorities are turning to collectors to fill some of the sales gap,” Tsetsekas said. While some of the more traditional philatelists decry the populist trend, Tsetsekas, a stamp collector himself, can see both sides of the debate. 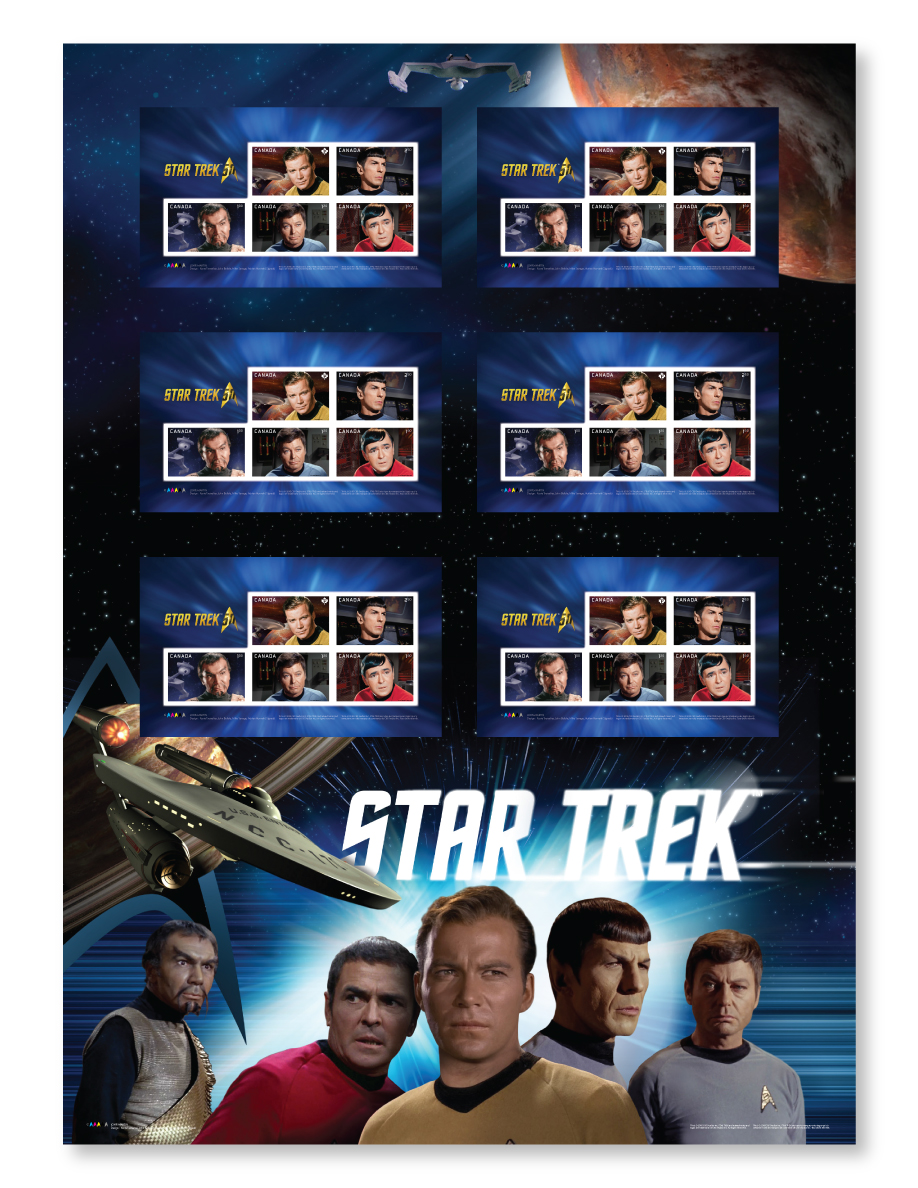 “I would want to continue having a healthy range of subjects reflected in our Canadian stamps,” he said. “Canadian content is important as is a sense that Canadian stamps should reflect all aspects of Canadian life and culture. I’ve heard that some long-time collectors are not that keen on the move toward pop culture subject matter. But personally I think the move is helping to cultivate a whole new generation of stamp collectors who have a new appreciation for this tiny art form,” he said.