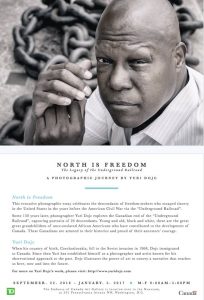 Yuri Dojc’s latest photo essay and exhibit, North is Freedom, takes a look at the descendants of slaves who escaped to Canada through the Underground Railroad.

The exhibit opened to the public September 23 at the Canadian Embassy in Washington, D.C., coinciding with the opening of the Smithsonian National Museum of African-American History and Culture.

Earlier this year we spoke to the celebrated Canadian photographer about his work on Last Folio, a book, exhibit and film project about Jewish communities in Slovakia—the remaining survivors of the Holocaust and the abandoned synagogues, cemeteries, and cultural remnants left behind.

In these outtakes of the interview published in our current print edition, Dojc relates Last Folio to North is Freedom, and opens up about this new phase in his career and life.

On the transformative experience of working on Last Folio

It’s totally changed me as a person. Until then, I thought photography was about frivolous pictures of nice design. Which lots of photographers do: nice design, cleverness. But I was really missing that last dimension, the one that shows you’re basically putting your soul into the picture. It’s an extremely different approach.

I used to joke when I was shooting, I was always trying to entertain my subject and every shoot with me was fun. I don’t do that as much as I used to. I’m so tense and concentrated on the shoot… I don’t want anybody to disturb anything because I consider the shooting now as sort of like a sacred act. It’s like if you go to church and you’re praying and some motorcycle gang starts doing circles around [you]. It will bug you. So yeah, I changed a lot. I changed dramatically.

I still do fun stuff. I still do witty sorts of things. I still photograph gorgeous women [laughs]. I didn’t change that way. But I know now I have to zone in on the subject matter every time. Before, my photography was known for being funny. And now it’s the seriousness. Sometimes I find a sort of beauty in it.

As a beginner photographer, Guy Bourdin was my god. I just loved that guy’s work, everything about him. And now—I was in London last year and I went to see his exhibition, and I realized how much he’s influenced me as a student but how now I’m in a different zone. 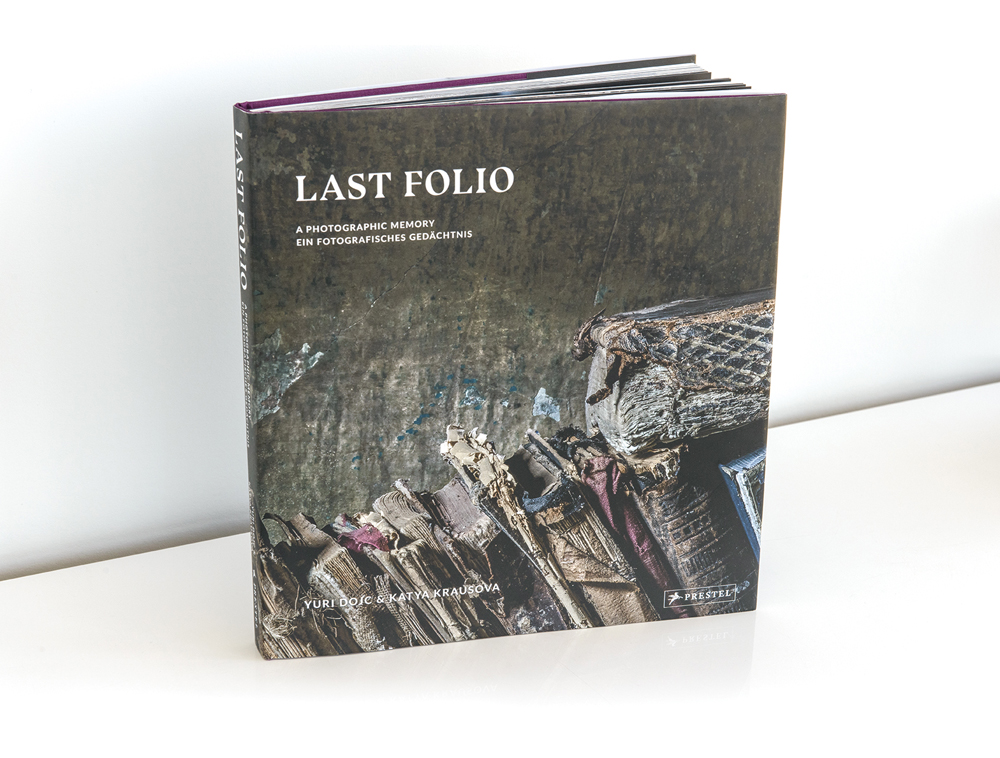 On the emotional reactions to the project

A husband and wife came to approach me. She had tears in her eyes and he was sort of agitated, and he says to me, ‘You know, I’ve been married to this woman for 15 years and I’ve never seen tears in her eyes.’ It was one of those moments where I totally just didn’t know what to say. And I was thinking about it a lot: what should I say? But what I should have done was hug her. At the time I was just so bewildered.

That edition has been showed in many, many countries, but in Latvia and Russia there were emotions coming out of people. Raw emotions, crying. They were touched. And this is a Christian woman, you know? She had nothing to do with the Holocaust or anything.

What he would tell young photographers about documenting tragic subject matter

Well if you see the movie, the movie ends in Rwanda. And I’m talking to young photographers in Rwanda and I’m telling them, ‘There’s a million people who died in Rwanda 15 years ago… Many of you probably have tragedy in your life, or in your family’s. If you don’t want people to forget, I highly recommend you seek out those who survived and record it. Because like General Eisenhower said during World War II when he went to the concentration camp, he said to bring photographers and film it quickly because in 10 years people will say this never happened. And, true to his words, that’s happened. So I said the same message to those kids in Rwanda. It’s inevitable. Even in Rwanda, they told me there are already certain circles and even certain countries that say [the Rwandan genocide] never happened, because it’s in their political interest, because that way they don’t have to feel guilty.

And if it weren’t for some people who keep going on, it would disappear [from the history books]. It’s very simple: you make it disappear and then you can do it again. Like the fascism in the country I am from, Slovakia—they just elected a neo-Nazi to the assembly. This is the first time since World War II. Like, real Nazis. This is not somebody who is pretending to be a Nazi! Now, this whole thing is frightening because we are going to fade away and then the new generation will come, and I don’t know if younger people will even be interested in this subject. Because you know, it’s usually, ‘Oh this has been done forever, so what the hell.’ 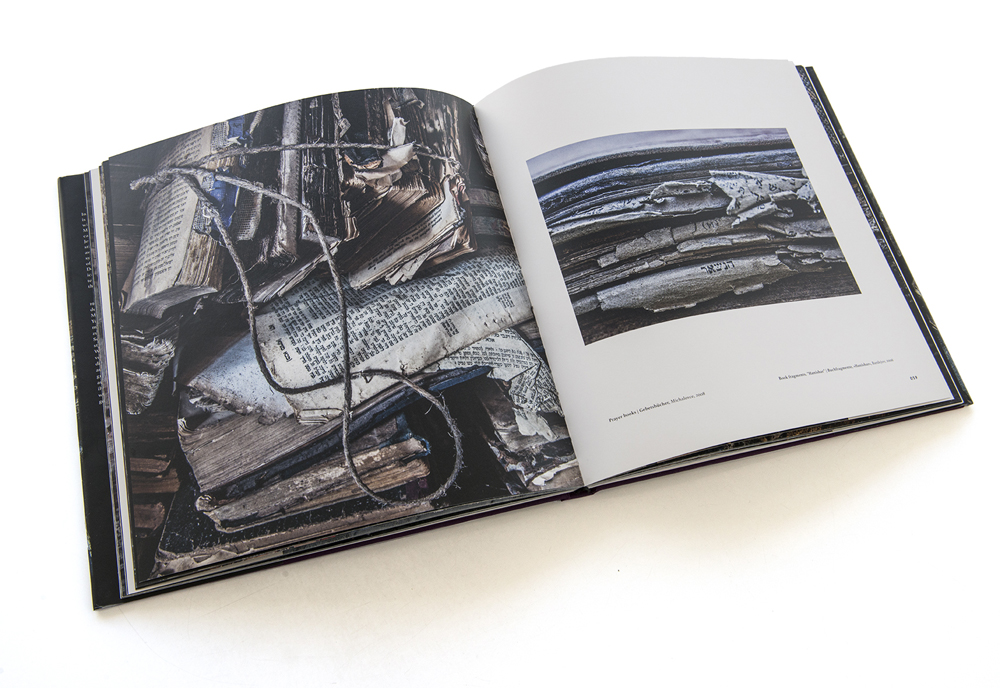 We went to one place where we found thousands of books, and we were putting them on the floor… We didn’t really plan anything special. And then [our producer] suddenly comes to me, she says ‘Look at this, there’s a whole city here’ [books belonging to locals]. But most people were just small craftspeople. There would be bookbinders, tailors. And then suddenly she comes to me, she says, ‘What was your grandfather’s job?’ I said, ‘Why are you asking?’ She said she was just curious. So I told her my grandfather was a tailor in a small town.

I was concentrating on a shot when she interrupted me again. It got to me then. I said to stop interrupting me. And she said, ‘Well don’t be so pesky! Look what I found.’ From a thousand dilapidated books she had picked the book that says, “Jakub Deutsch, tailor.” And that was my grandfather, who I never met.

On the book design process and working with Pentagram

We insisted that Pentagram Berlin design the book against their [the publisher’s] wish. And then, of course, we didn’t like the paper! And then I was in Costa Rica when the proofs came, so I’m in my hotel spreading my proofs on the floor and I didn’t realize that the light in Costa Rica is so much more intense than in Canada. You have to be very careful because you’re making judgments based on a totally strange light. Even today, I’m looking at the light here [in Toronto] and it’s colder. In Costa Rica it was much more mellow.

I must give a lot of credit to the producer, who really, really insisted on all these elements, that Pentagram design the book.

Designedge: Did you guys give Pentagram any specific instructions or guidelines?

They got some guidance from the publisher, but they disregarded it. Like really, they’re gods in the design world, you don’t tell Pentagram what to do. And by the way, my exhibition was designed by Pentagram, the whole structure of it. Both of them, the one in Europe and the one in North America. The design was by Pentagram to the last detail.

Don’t forget. Things forgotten can happen again. You know, I’m not going to change the world with a book. You can make a tiny contribution. This is a universal thing, a universal thing about feeling superior to another people. That’s what the whole thing was, Hitler and company felt that they were superior human beings, and that kind of attitude can happen quite often. This was the most extreme case in the history of mankind; basically you feel that you are so superior that you have the right to destroy another people.

On continuing this thread with North is Freedom

We’re talking about four, six generations already, and how much people still remember that, and how again, they forgot. The narrative is the same. The people come, escaping for freedom. I came to Canada, and I escaped for freedom too. I came from communism, which was a pretty monstrous system by itself. We are launching it in September in Washington D.C. at the Canadian embassy, and another thing is that they opened a museum of Black history in the U.S. at the same time, so it coincides with the opening of that museum.

North is Freedom runs at the Canadian Embassy in Washington, D.C. until January 5, 2017.
Last Folio opens at the Art Gallery of Hamilton, Ont. on October 23, 2016.